There’s a vulnerability to life at the moment. I feel it and I’m sure you feel it. For some of us it’s a new kind of vulnerability: the fear of getting seriously ill, the anxiety of not knowing what to do and what not to do; and the heightened sense of mortality.

I experienced this a few years ago too when I developed a DVT and was rushed to A&E. The following months of trying to discover the cause made me mistrust my own body. The slow recovery made me extremely cautious, around traffic in particular because the drugs I was on to stop my blood clotting had no widely available antidote. “If you bleed we really can’t stop it.”

It was a lesson, a severe lesson. The constant background fear and the overwhelming sense of vulnerability gave me a visceral understanding of what it must be like to live your life feeling vulnerable, all the time.

Writers draw their experiences into their imagination and transfer them across to other people’s stories, albeit made up ones. And that’s what can make literature, poetry and plays so powerful.

The trouble is writers can only experience so much of life. They have to use their imagination, inspired by the research and the right conversations, to reflect the inner feelings and resulting motivations of their characters.

If imagination without experience is at one end of a scale and living with something every day is at the other then it’ll be interesting to see how our fiction changes and develops as a result of the current pandemic.

If you’re looking for alternative bedtime stories or flashes of near-future fiction to infiltrate and steer your dreams then look no further.

Take one a night or binge on the lot, the choice is yours…

“The future is ours and it’s up for grabs…”

I know this is a phrase I use a lot, but it really is true. There’s a lot of talk at the moment about what the ‘new normal’ will look like. Well, who do you think will decide that?

I wrote an article before this crisis that discussed whether to write dystopias or utopias. I settled in the grey area between the two where real life takes place, using the conflict of getting from a dystopia to a utopia as the basis for the story. The article ended with a quote from Laurie Penny that is at least as pertinent now as it was in 2015 when she said, “Right now, the future seems dark and frightening and it is precisely now that we must continue to imagine other worlds and then plot ways to get there.”

Fiction is one way of imagining and plotting a new future, and science fiction that deals with the near-future is well placed to do that. A lot of my work is written with that in mind, often with a warning of what best to avoid, as well as a glimpse into the positive side of humanity and its emerging technologies.

As this review from Orchid’s Lantern says, “In summary, Biohacked & Begging skillfully extrapolates ideas from cutting-edge tech and applies them to daily routines, exposing our greeds and vulnerabilities but also, I think, our saving graces.”

That’s my current challenge – to write stories that at least point to the possibilities of a better future. That’s not to say they have to be idealistic about us humans or evangelistic about the fragile technology, that would be naive. But, they can explore the grey area that is our day-to-day reality in a way that gives options, and positive ideas about the different directions we can take.

My point being that there is no magic solution to our future, but the more of us that get involved in understanding its possibilities and then shaping it, the more likely we are to get a future that works for us all.

Over the past couple of weeks while I’ve been thinking about this I’ve been reminded of quite a few stories from my collections. One of these is Effort Less, which imagines a different way of attributing value to someone’s work. Others are US and Biohacked & Begging; both set in the same world where human skin is designed crack and fail without human contact.

Is it stupid to believe that fiction can be of any use other to help us escape the dystopia we find ourselves in?

Well, as Ursula LeGuinn said in 2014, “Hard times are coming, when we’ll be wanting the voices of writers who can see alternatives to how we live now, can see through our fear-stricken society and its obsessive technologies to other ways of being, and even imagine real grounds for hope. We’ll need writers who can remember freedom – poets, visionaries – realists of a larger reality.“

So for those of us that are safe and secure enough to have the luxury of being able to think beyond tomorrow, let’s be angry about what’s wrong, warn about what could go wrong and paint some positive possibilities of what could be. 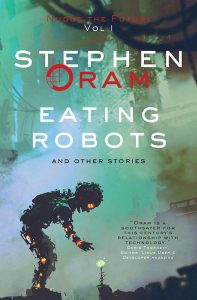 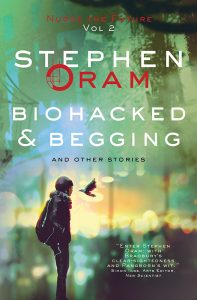 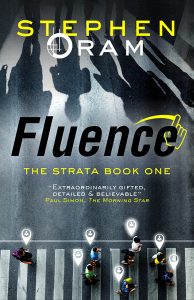